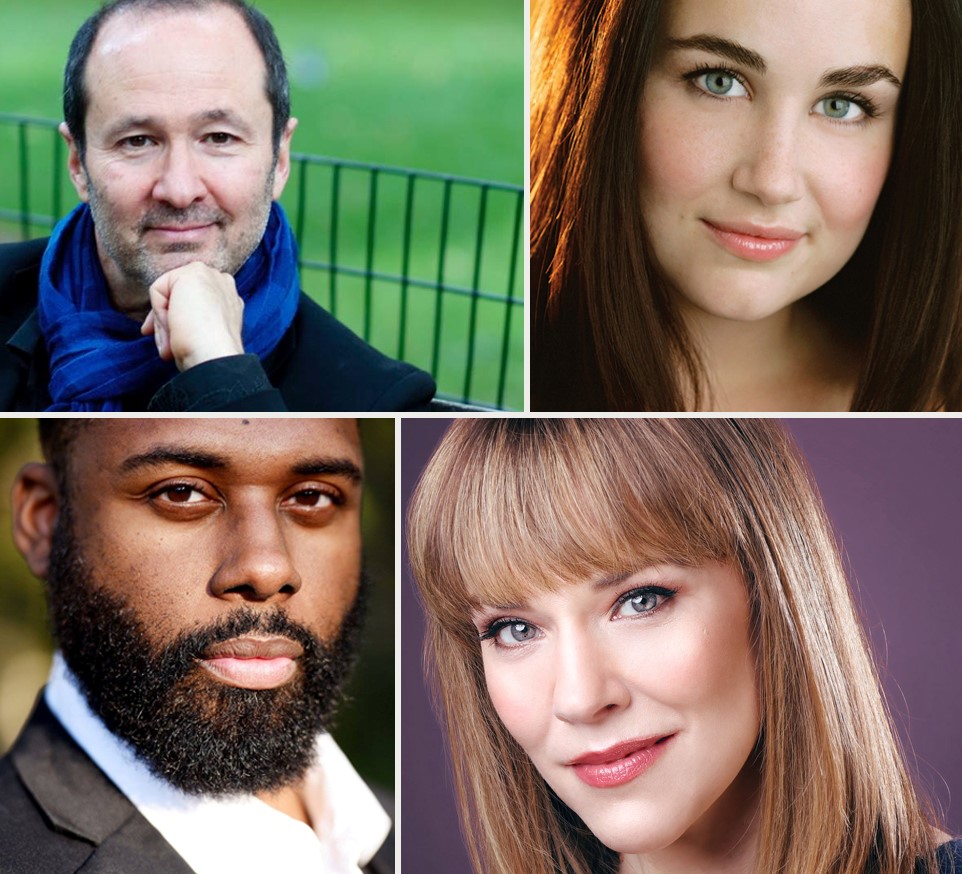 The Night Quite Christmas Cabaret is on tonight! Enjoy this snowy evening with beautiful music and a fantastic dinner. We’re lighting Hempstead House’s enormous fireplaces, so its cozy and bright in here! Limited tickets are available.

This year’s cast includes two extraordinary Broadway artists making their Hempstead House debuts, Emily Skinner and Nicholas Ward; and the resplendent Lauren Worsham returns with Steve to round out the company of four marvelous voices. Please scroll below for their bios.

General Tickets are $125 per person. Beginning at 7 p.m., the evening includes cocktails, dinner, concert, and dessert with the artists.

Limited VIP Tickets are $250 per person and include a 6 – 7 p.m. cocktail reception and moderated Q & A with the artists in the beautiful mezzanine-level Morning Room.

NICHOLAS WARD, originally from Niceville, Florida, is slated to appear on Broadway later this season in the highly anticipated Disney musical, Frozen. He was last seen on Broadway in the original cast of the acapella musical In Transit. He made his Broadway debut in the critically acclaimed revival of On The Town where he opened the show with a rousing rendition of “I Feel Like I’m Not Out of Bed Yet.” He has appeared in numerous City Center Encores! shows, including Pipe Dream featuring Leslie Uggams, Annie Get Your Gun starring Megan Hilty, Zorba with John Turturro, and Brigadoon, starring Tony Award-winner Kelli O’Hara. He was a featured soloist in Andrew Lippa’s debut performance of the iconic musical suite, I Am Harvey Milk starring Tony Award winner Kristin Chenoweth and hosted by Whoopi Goldberg at Lincoln Center’s Avery Fisher Hall. Regionally, his work includes Caiaphas at St, Louis MUNY; and Jim in Big River and a hilarious outing as Audrey 2 in Little Shop of Horrors, both at Alpine Theatre Project. He was seen as King Triton in The Little Mermaid at Olney Theatre Center, and Fred in Smokey Joes Café at Ogunquit Playhouse, to name a few.  He was lauded for his performance at the historic Goodspeed Opera House in the iconic role of Joe in Showboat. Recently he made his debut on the silver screen alongside acclaimed Actress Meryl Streep in “Ricky and the Flash.”

LAUREN WORSHAM is a Brooklyn-based Tony-nominated performer who originated the role of Phoebe D’ysquith in A Gentleman’s Guide to Love and Murder for which she won Drama Desk and TheatreWorld awards. Favorite roles include: Lisa in the critically-acclaimed Dog Days at Montclair Peak Performances, Flora in New York City Opera’s Turn of the Screw, Amy in Where’s Charley at New York City Center, Cunegonde in NYCO’s Candide (directed by Hal Prince), Lili in Carnival (directed by Darko Tresnjak), Cinderella in Into the Woods, and Olive in the first national tour of The 25th Annual Putnam County Spelling Bee. She performs in concert frequently, including programs at Carnegie Hall, Caramoor, Merkin Hall, Oregon Bach Festival, Joe’s Pub, Henry’s, Galapagos Art Space and NYCO’s VOX Program. She is also the lead singer for the indie-rock band Sky-Pony.

STEVEN LUTVAK is thrilled to be back at the Sands Point Preserve. Steven made his Broadway debut as composer/co-lyricist of A Gentleman’s Guide to Love & Murder, which, in 2014, won the Drama Desk, Drama League, Outer Critics Circle, and Tony Awards for Best Musical. His film work includes the title song to Paramount’s Mad Hot Ballroom. Other awards: Kleban, Fred Ebb Awards (with Robert L. Freedman, his writing partner on Gentleman’s Guide); the ASCAP Foundation Richard Rodgers New Horizons Award; two Jonathan Larson Foundation Grants; Johnny Mercer Emerging American Songwriting Award; and National Endowment for the Arts grant. Having performed his songs at Carnegie Hall and the Library of Congress, among other venues around the country, Steven has recorded two CD’s, The Time It Takes, and Ahead of My Heart. He is enormously proud to be on faculty at his alma mater, the Graduate Musical Theater Program at NYU. Steven lives in NYC with his husband, choreographer Michael McGowan, and their daughter Eliot Rose.