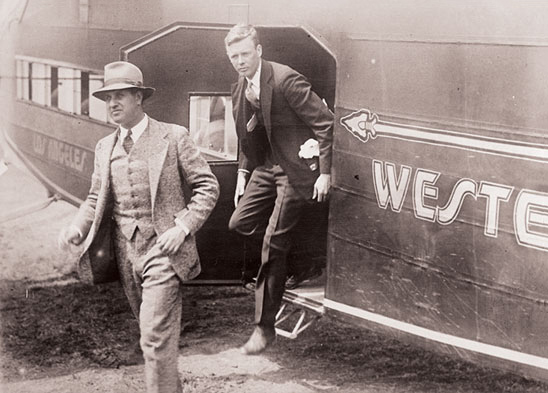 Legendary aviator Charles Lindbergh was a close friend to Harry Guggenheim and frequent visitor to Falaise.

To secure a vibrant future for the Guggenheim Estate’s mansions and natural environments by reinventing historic preservation; to enhance and promote the Sands Point Preserve as an accessible resource for the community by providing four seasons of imaginative and enriching cultural, educational, horticultural, and wellness programming and immersion into the restorative power of nature.

Timeline of the Estate

Financier Howard Gould, son of railroad robber baron Jay Gould, created the estate by purchasing the undeveloped land in 1900 and 1901. Castle Gould, a massive 100,000-square-foot medieval castle, modeled after Ireland’s Kilkenny Castle, was completed in 1902. It was an attempt to please his wife, actress Katherine Clemmons. But she was not pleased, so he built a second mansion across the property, the Tudor-style home, Hempstead House – a more intimate 50,000-square-foot mansion with a 60-foot-tall entry foyer. Sadly, their marriage ended in a divorce that was played out in the press with Gould accusing Clemmons of having an affair with William F. Cody (known in Old West lore as Buffalo Bill).

After the divorce, Gould sold the estate in 1917 to mining tycoon Daniel Guggenheim. Daniel became the third Guggenheim to own an estate in Sands Point; his brothers Isaac and William owned estates nearby. In 1923, Daniel gave 90 acres of the estate to his son, Harry F. Guggenheim, on his marriage to Caroline Morton. Harry built his home in the style of a French-Norman manor house, atop the bluffs overlooking the Long Island Sound, and named it Falaise, meaning “cliff” in French. Although they later divorced, Falaise remained Harry’s summer home, and his close friend Charles Lindbergh was a frequent visitor. Falaise has been preserved much as it was when Harry and his third wife, Newsday founder Alicia Patterson, were in residence.

Daniel, and his wife, Florence, enjoyed the legendary Gold Coast lifestyle until Daniel’s death in 1930. Florence Guggenheim then built and relocated to Mille Fleurs, a smaller mansion on the property with a garden of a “thousand flowers.”

After auctioning off the furnishings of the Hempstead House in 1940, Florence reopened the house for 75 British refugee children who resided there during World War II, while foster homes were organized for them.

Florence donated 162 acres of the estate, including Hempstead House and Castle Gould to the Institute of Aeronautical Sciences in 1942.

The Institute leased, and then sold the property to the United States Navy in 1946. Admiral Luis de Florez, a pioneer in “Synthetic Training,” moved his Special Devices Center (SDC) from Washington, DC to Sands Point, renaming it the Naval Training Device Center (NTDC). Hempstead House and Castle Gould were renovated to accommodate offices and laboratories. The NTDC designed, developed, and tested flight simulators and training devices for the Navy and Army, including the Link Trainer, one of the most noteworthy flight trainers to be procured and fielded by NTDC – it was used to train more than 500,000 pilots in World War II. After the war, operations “Paperclip” and “Crossbow” funneled German rocket scientists working on secret projects through the NTDC, as they made their way to Redstone Arsenal and other missile development and test sites.

In addition to the military staff, the Navy employed 800 civilians on this site at its peak of operations during the 1950s and 1960s. In 1967, NTDC was moved to Orlando, Florida, and the 162-acre site was declared government surplus. The same modeling and simulation technology developed at the Sands Point Preserve, and later by “Team Orlando” is now used in medical, entertainment, education, transportation, homeland security and other applications. The birth of this expanding technology took place at Sands Point.

In 1971, Nassau County acquired 127 acres for public recreational use. That same year, Harry Guggenheim died, and, in accordance with his will, his 90-acre estate, including the fully furnished Falaise mansion, was deeded to Nassau County for use as a museum site. These two acquisitions restored most of the former Gould/Guggenheim estate as the Sands Point Preserve.

Today, the Conservancy celebrates the ongoing progress made in every aspect of the Preserve’s conservation and restoration initiatives, educational and arts programming, as well as the expansion of new revenue sources.

The Preserve offers programs and activities for every age and interest throughout the year. Young visitors can find many opportunities for learning and entertainment through varied educational programs at the Phil Dejana Learning Center and Outdoor Classroom. Visitors can attend a music concert in Hempstead House or on the Great Lawn, stroll down or hike up a trail through the woods, take a fitness class, or just search for shells on the breezy beach. Families can plan outings that bring them closer to nature and history – and to each other. Our programming is always expanding, so please check back often for new events and activities.

As a non-profit organization, the Conservancy relies on membership and contributions from individuals, businesses, and foundations in the community. Join the Conservancy and become a part of the Guggenheim Estate’s legacy.

How Sands Point Got Its Name

Sands Point derives its name from the historic Sands Family, whose lineage can be traced back to Robert de Sandys, born in Rottenby Castle, England in 1379. In 1691, Captain John Sands and his family arrived in Cow Neck, where they built their home on 500 acres. The house still stands today on Sands Point Road.