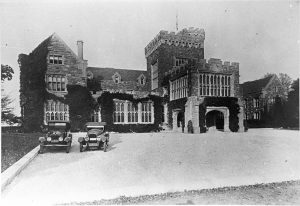 Hempstead House is the embodiment of Gold Coast opulence. It is one of four mansions on the grounds of the Guggenheim Estate, which also includes Castle Gould, Falaise and Mille Fleur. The Tudor-style castle served as a summer residence for the family where they hosted grand parties, performances and exhibitions by world-class artists, and gatherings of the powerful elite of the time.

Designed by architects Hunt & Hunt in 1912, the building features an exterior of granite and Indiana limestone. This 50,000-square-foot three-story mansion is 225 feet long and 135 feet wide. It has 40 rooms, including a 60-foot-tall entry foyer. The first and second floors of the Hempstead House measure over 1.5 acres.

Inside the foyer, the imposing vaulted ceiling illustrates the extraordinary lifestyle of the roaring 1920s and 1930s. The foyer’s magnificent Wurlitzer Opus 445 Theatre Organ is fully restored. The massive pipes that are visible on the foyer walls are only decorative – the music reverberates through strategically designed openings in the floors.

During the Guggenheim’s occupancy, Hempstead House was a treasure trove of artwork, decorative items, and furnishings, many of which were authentic Tudor and Jacobean antiques imported from Europe. Medieval tapestries once hung on the walls, and oriental carpets covered the floor. 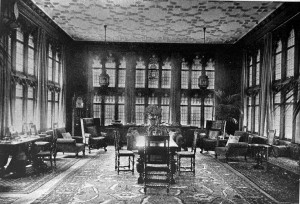 The walnut-paneled Library was copied from the palace of King James I, and relief portraits of literary figures still decorate its plaster ceiling. The Billiard Room originally featured a gold leaf ceiling, hand-tooled leather wall coverings, and carved oak woodwork from a 17th-Century Spanish palace.

Stone gargoyles around the ceiling peer down into the Summer Living Room. The house also featured stained and leaded glass, red velvet draperies from a Spanish cathedral, Flemish tapestries, and artwork by Rembrandt, Van Dyck, and Rubens.

The sunken Palm Court once contained 150 species of rare orchids, plants and potted trees. An aviary housed exotic birds in ornate cages among the flowers. On the mezzanine level is the Breakfast Room with leaded windows on three sides overlooking the park grounds. Tall Gothic windows flood the second floor hallway with light, creating a dramatic effect when visitors enter the rooms overlooking the Long Island Sound. All of the rooms on the second floor have carved fireplaces and are detailed with ornate plaster trim on the walls and ceilings, each in a unique style.

After Daniel Guggenheim’s death in 1930, his wife Florence closed Hempstead House and built the fourth mansion on the property, Mille Fleur, a smaller waterside home for herself. Hempstead House’s furnishings were sold in 1940, and Florence opened the mansion to children evacuated from the war in Europe until foster homes could be found for them. In 1942, she donated 162 acres of the estate to the Institute of Aeronautical Sciences. The U.S. Navy purchased the property in 1946 for a Naval Training Device Center, and, in 1971, the property was acquired by Nassau County, NY. 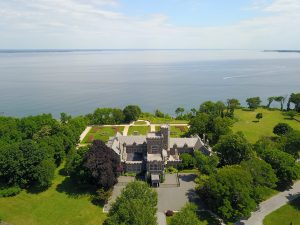 Today, Hempstead House stands ready for entertaining with its magnificent architecture, landscaped gardens and exquisite views overlooking the Long Island Sound. Concerts and lectures are held throughout the year in its beautiful rooms. Tours can be arranged by calling the Gate House.

Hempstead House is also available for private events and is often selected for film and television productions – a vital source of revenue for the Conservancy. It has been the setting for many feature films, including Scent of a Woman, Malcolm X, Great Expectations and Teenage Mutant Ninja Turtles, Gemini Man, and for the small screen, The Blacklist, Billions, The Americans, Boardwalk Empire, Royal Pains, Masters of Sex, Feud, and The Gilded Age.