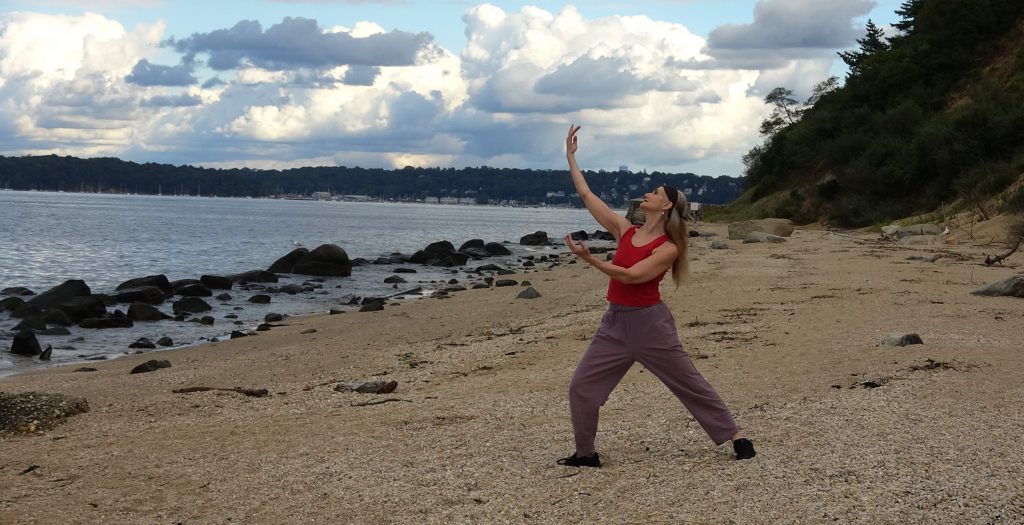 Dance Visions NY presents “Evening, a Mosaic of Poetry, Dance, Art, and Nature” – a new film for the pandemic era.

Under the direction of Beth Jucovy, Dance Visions NY was founded in 1990 and honors the legendary choreographer Isadora Duncan’s choreograhy, aesthetics, and techniques, which were created in the early 20th century – the very same era in which the Guggenheim Estate was formed.

This year, Ms. Jucovy adapted her creative vision to the medium of film, and the result is a remarkable journey that is a metaphor for our time. “Evening” will be posted on Dance Visions NY’s YouTube channel for everyone to enjoy free of charge beginning November 21, 2020.

Originally intended to be a poetry/dance work performed live in nature, “Evening” was instead created as a multi-disciplinary art film, encompassing poetry, dance, art, and nature. It is based on an original poem “The Subject and Power,” by Kyra Jucovy, daughter of the choreographer.

The poem depicts a journey that follows a river from its source in caves through springs to the ocean. “Evening” is the third part of the poem in which the river gradually flows to the mouth of the ocean, and a philosophical dilemma ensues.

According to Jucovy, “It illustrates the cyclical nature of many aspects of our world and has particular relevance today, with its theme of endings that lead to beginning anew.”

The work’s motivating force throughout are the spoken words, with actor Tzena Nicole as the voice and unifying presence, expressing the widely varying emotions experienced by the protagonist as she works through her dilemma with her companions.

The choreography is inspired by the Isadora Duncan aesthetic and philosophical approach, which are fully complementary to the poem; the dancers embody the narration.

The film incorporates a variety of sounds and background music as well as imagery and video clips from nature. Footage was recorded on the beautiful grounds and beachfront of the Sands Point Preserve. Performers recorded at outdoor spaces that were accessible to them during the pandemic in New York City and states across the country. The movement takes place in a wide variety of natural and human-made locales, broadening the scope of the film and incorporating a picture of the nation in the pandemic summer of 2020.

EVENING: A Mosaic of Poetry, Dance, Art and Nature
Finding one’s way in a universe where destruction and creation are inextricably intertwined

This program is made possible in part with funds from the Decentralization Program, a re-grant program of the New York State Council on the Arts with the support of Governor Andrew Cuomo and the New York State Legislature and is administered by The Huntington Arts Council, Inc. Support was also provide by the Dance NYC Coronavirus Fund.